The End of Magic 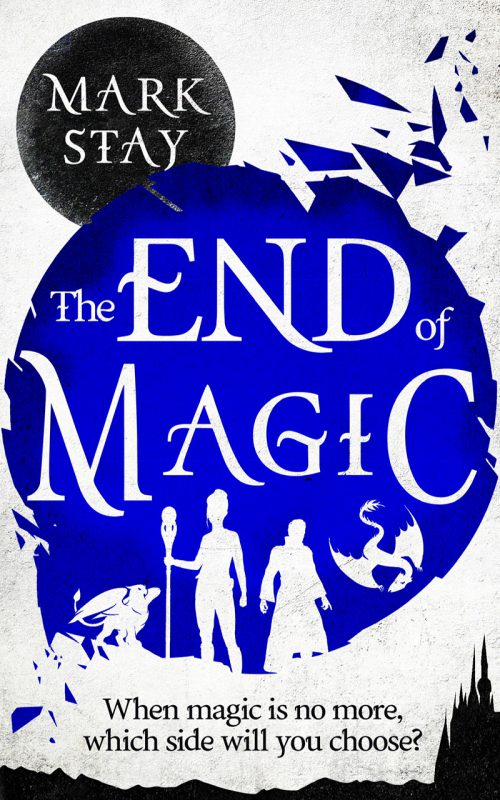 Sander Bree is a royal mage. Steeped in privilege, he lives a cushy life advising the king on matters of court and politics, yet still complains that he’s stuck in a rut.

Rosheen Katell is a freelance mage and, with Anzu her griffin, she’s worked hard to build a reputation as a trustworthy truth seer. She never lies, never kills.

The source of their power is the Lapis Moon in orbit above. Very soon, that magic will be gone, changing their lives and their world forever.

Sander must keep a promise that would have been difficult enough with magic, but is a suicide mission without it. Rosheen is forced to side with a murderous warlord, and her once-solid principles are tested and found wanting.

Both are set against one another in a war unlike anything the world has seen before.

Press for The End of Magic

Edward Cox, author of the epic Relic Guild series, says… “Slick and entertaining, The End of Magic is powerful fantasy.”

Gavin G Smith, author of the superb Bastard Legion series, says… “Mark Stay takes the tropes of high fantasy and uses them to wield an original, compelling and intricately plotted story. With some wonderfully human characters (even the elves) and at times laugh out loud funny, The End of Magic is exactly the kind of fantasy that we need more of.”

And James Barclay, author of the classic Raven series, says… “Mark Stay’s End of Magic is the sort of book you give to people who say ‘prove to me why I should read fantasy’. It’s an intensely human novel, beautifully paced, populated by finely drawn characters and containing startling allegories to the world we find ourselves in today. It deals with tragedy, cataclysm, treachery and hope with equal skill. It asks difficult questions and answers them with clever twists, neat prose and incisive dialogue; delivering a most satisfying conclusion. I loved the humour amidst the tragedy. I was drawn in by the premise, carried along by the unfolding dramas and disasters, the hard, sometimes conflicting choices and inspired by the sheer will of the human spirit to triumph over disaster. A simply terrific read.”

“The End of Magic is a gripping read from start to finish, with unexpected twists and turns throughout, culminating in a dark and bittersweet ending sure to tug at the heartstrings.” Kirsty Herrington, From Page to Stage