Gods of the New Moons 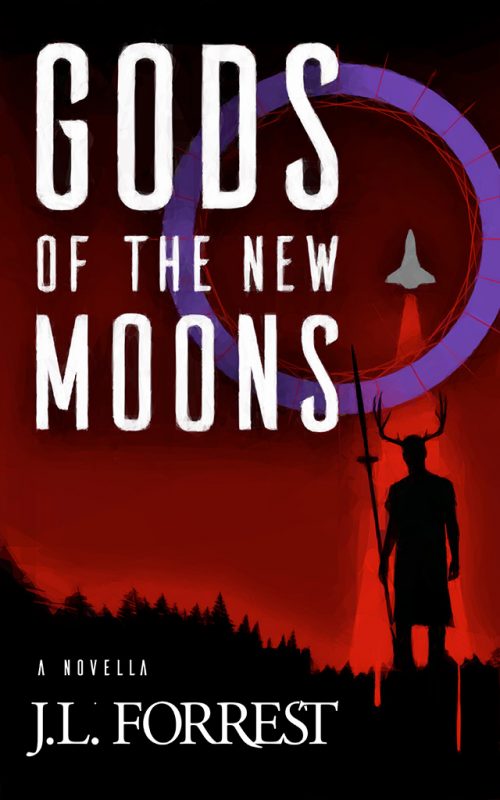 I. A Single Pine

Robots lock me into a lozenge not much bigger than a coffin, and inside a pressure harness they clip the baby to my chest. Two technicians supervise the procedure before launching me, and the baby, into space.
Requiring no more force than a gentle nudge, the lozenge eases from the airlock at the same orbital velocity as EIK-Cel Station, and a weak thrust angles us into an approach. Relative to Earth’s surface the baby and I are moving at 26,295 kilometers per hour, and we’ll enter the atmosphere doing Mach 21.
I hold my tiny, precious passenger, caressing his grapefruit-sized head, enjoying the soft down of his dark hair, marveling at his calm. The lozenge ushers us smoothly toward the stratopause. Excepting minor lurches, the baby and I float, meshed to the lozenge’s frame.
The baby’s smell calms me.
I attribute this calming to evolutionary biology, one of nature’s tricks, short-circuiting the self-preservation instincts of otherwise functionally selfish adults. Adults will commit suicide to save a baby. For months I’ve been one of this infant’s caretakers, I know babies don’t always smell good, and for now I’m confined with a helpless shit-making machine. While I can, I breathe another lungful of clean-baby scent.
My own laughter surprises me and, joining me, the baby coos. Air vibrates through his lips and his spittle floats free. In zero gravity, this spit gathers into a wobbling sphere, following the currents of our breaths. By some deeper command of physics, I know that spit will end up on me.
In front of my face, a fifteen-by-ten centimeter window frames the growing edge of Earth’s atmosphere. Our acute approach will minimize friction and slow the lozenge on a long ride through the stratosphere and past the tropopause. As we near the frictional threshold, the lozenge rolls me, pointing my toes in our direction of travel. Facing up, I realize this is the first time I’ve ever used Earth as my relative center. I don’t bother looking for Station, not in this light. Earth reflects too much sunlight, too bright for any stars, and Sol shines a few degrees outside my angle of vision.
Our deceleration begins as a faint tug toward my feet. For several minutes it’s as if I’m standing inside the outer ring of Station, a perfect and comfortable 1g, then strengthening forces distribute along my back like I’m reclining on a hillside.
Not bad, easier than expected, but my passenger looses a high-pitched shriek. He hiccups and screams more, and here’s something the technicians never designed for—within confined, hard-shelled spaces, a baby’s cries reach ear-splitting volumes.
The flight engineers had calculated well, meaning we never exceed 2.1g and even that soon passes. The sky transitions from matte black to soft blue.
In the subsequent silence I fear the baby has died, that the minimal reentry forces proved too much for his small body. But no, he’s sleeping again, peaceful as can be.
From the ground, anyone watching our arrival would have witnessed a bright arc. Yet on Earth few witnesses remain. My passenger and I will add two to their number—we are aliens here, first-timers, though I’m certain I know more about this world, factually, than do most of its residents.
The lozenge’s comm sounds in my ear: “Your vitals are good, Aur. How you feeling?”
The voice belongs to Mr. Avidità. He rates this mission critical, has reiterated its risks.
“I’m feeling fantastic, Your Grace. Thank you.”
“Good,” he says. “We’ll watch you all the way. Do confirm your health and position before scuttling the drop-craft.”
“Yes, Your Grace.”
He didn’t need to remind me of my tasks or our protocols—I’m a Harque and we seldom forget. His words, I figure, are for his own benefit, a stress response. The King isn’t allowed to show doubt, but he must sometimes feel it.
“Once you abandon the lozenge,” he says, “the satellites will keep an eye on you as long as they can.”
Flaps extend from the lozenge’s exterior, the g-forces multiply, and again the baby squawks. The wind roars, too, resistance and fluctuations in air pressure shaking the airframe. Outside the window, clouds envelop us in a soft, hazy, white nothing.
The altimeter reads four kilometers. We’ll hit the deck at about twelve hundred meters, three degrees from horizontal, and we’re still clipping along at more than the speed of sound.
As we impact, the lozenge’s AI will measure forces in three dimensions, and its frame-inside-a-frame construction will engage counter-forces to cushion the inertia. The slightest error, a delay of milliseconds, will reduce me and the baby to bonemeal and liquefied flesh inside an expensive can of carbon-ceramic titanium.
The sole life which a man can lose is that which he is living at the moment, wrote my namesake. The longest life and the shortest amount to the same thing.
The baby needs a diaper change. I’m grateful he waited this long.
The noise must terrify him, the cacophony as the shell deflects earth and stones. We bounce then hit again, yawing to starboard, and I’m afraid we’ll roll. I grit my teeth but, slowly, the lozenge grinds to a stop.
Beyond my viewport, a single pine tree points back toward orbit, through a sky the color of eggplant, an evening shade. We’ve landed on that narrow line which I have ten thousand times observed from altitude, the threshold between Earth’s night and its day, and I’ve arrived in time to experience my first terrestrial sunset.
No time, however, to admire it.
The baby calms again. His diaper change will have to wait until I can put some distance between us and our landing site, because anyone might have witnessed our fall from heaven.
And at these latitudes there’re cannibals.

In my cohort I wasn’t the smartest, but I wasn’t an idiot either. By Christmas Day of my seventh year, I’d a sense of my value to Mr. Avidità. He afforded me more attention than he did the other boys, though this made them hate me.
My seven-year-old self, sitting in an exam chair in a room of polished titanium:
From the other side of a small table, Ms. Trotsky’s smile encouraged me, and she held up her hand, alerting me to prepare. I sat straighter and focused.
“What sort of rock is limestone?” she asked.
“Sedimentary,” I answered.
“What is its chemical composition?”
“Calcium carbonate, Miss.”
“Marble is also calcium carbonate. Is it limestone?”
“No, Miss. Same composition, different sort of rock.”
“What sort would that be?”
“Metamorphic.”
“Can you name another natural form in which we might find calcium carbonate?”
“Stalactites and stalagmites.”
“Good. Where did most of the calcium for limestone originate?”
“On seabeds.”
“From what?”
“Prehistoric marine creatures.”
The exam-room portal dilated and Mr. Avidità entered. He wore no tie, perhaps owing to the holiday, and his hands were in his pockets. Casual, relaxed, at ease. Observing from the doorway, he gestured for us to continue.
“Let’s change the subject,” said Ms. Trotsky. “The monarchs of England in order.”
“Egbert,” I said, then, “Aethelwulf, Aethelbald, Aethelberht, Aethelred, Alfred the Great—”
“What made him great?”
“He drove the vikings from the Isles and united England.”
“Continue.”
“Aethelstan, Edmund, Eadred, Eadwig, Edgar, Edward the Martyr, Aethelred the Second, Sweyn Forkbeard, then Aethelred again, then Edmund the Second. Cnut, Harold the First, Harthacnut—”
Mr. Avidità cleared his throat. “Enough,” he said. “I’m sure Aurelius knows the others, to the last?”
“Queen Victoria the Second.”
“How’s young Aurelius doing, Ms. Trotsky?”
“A smart and sensitive boy,” she said.
Mr. Avidità nodded. “His recall scores?”
“Ninety-ninth percentile, sir.”
“Creative and improvisational?”
“High middle.”
“Empathy?”
“Also high middle, sir.”
He narrowed his eyes, seeming to consider my empathy. “Languages?”
“Eighty-ninth percentile.”
“Mathematics and logic?”
“Ninety-second percentile, sir.”
“Admirable.” He smiled at me, and I loved his smile. All the boys did. The King of EIK-Cel, of all the Avidità Stations. The paterfamilias. Our father. “You’ve been patient this morning, Aur.”
I faced him, still in my chair.
“It’s Christmas,” he said, offering his hand to me, and I leapt from my seat to put my hand in his. “We’ve had enough schooling for the morning. You too, Ms. Trotsky, you can power yourself down, presuming you’ve no further functions to complete.”
She stood, her smile reserved, her hands clasped. “Very good, sir.” At the corner of the room, she settled into an antique chair behind an old wooden desk, her posture perfect. Her eyes closed and she stilled.
The portal beside Mr. Avidità opened. “Come along, Aur.”
“Where’re we going?” I asked.
“I’d like to administer one more test today. That okay with you, Aur?”
I admit I hesitated, held by something in Mr. Avidità’s tone, something which I’ve since recognized as signifying his natural showmanship. For every mystery he divulges, he holds a hundred others in reserve.
At last I said, “It’s all right, Your Grace,” because what else would I say? I was seven and he was the King.
He led me from the sleeping Ms. Trotsky, and we entered a long hallway which admitted sunshine from Station’s high inner edge.
Mr. Avidità guided me down a breezeway between my school building and the crèche dormitories. Beautiful buildings, reminiscent of medieval Japanese fortresses but fashioned of ornately printed carbons, titaniums, and teakwood. He led me downstairs into a cherry-blossom garden, then below ground—into the tube’s service corridors and finally to an airlock.
Pure diamondide, the lock’s inner and outer doors allowed me an unobstructed view into space. Here the centripetal gravity exceeded 1g, though only by a few percent. On the floor, inside the airlock, a gray rabbit stood on a square of lawn framed in aluminum.
My heart raced.
“I’m giving you a choice, Aurelius.” Mr. Avidità squeezed my hand, reassuring me. “Either option is acceptable—no wrong answers.”
I looked up at him.
“First option,” he said. “You can have anything you want, anything in my power to give you.”
“Can you give me my mother, Your Grace?”
“That I cannot do, Aurelius. You weren’t born of a woman.” He chuckled and shook his head. “Still, I’m the wealthiest man in System—you could be my heir?”
The rabbit’s nose twitched, its long ears rotating. It nibbled the grass.
“Second option,” said Mr. Avidità. “You can have this bunny. Love it, nurture it, give it as long and comfortable a life as you can.”
Shaking its head, the rabbit hopped onto the airlock’s cold floor, decided it didn’t like the cold, then jumped back to the grass for more munches.
“What if I do want to be your heir?” I asked.
Mr. Avidità pointed to the wall beside us. On it, a panel displayed many controls. Two old-fashioned mechanical switches, buttons really, occupied its center. One red and one green.
“Hit the red button, Aurelius,” said Mr. Avidità, “and you’ll launch the bunny into space. This afternoon, I’ll sign the documents declaring you my heir.”
The bunny’s eyes, a soft brownish-blue hazel unknown in humans, searched for the next succulent blades of grass. I observed in those eyes such innocence and vulnerability. I was a runty child, smaller than my more aggressive peers, but the rabbit was smaller still.
Laying his hand on my shoulder, Mr. Avidità said, “What would you like for your Christmas present, Aurelius?”
I hit the green button.